Well first let’s look at what happens to a transformer when it is in this “no-load” condition, that is with no electrical load connected to its secondary winding and therefore no secondary current flowing.

A transformer is said to be on “no-load” when its secondary side winding is open circuited, in other words, nothing is attached and the transformer loading is zero. When an AC sinusoidal supply is connected to the primary winding of a transformer, a small current, IOPEN will flow through the primary coil winding due to the presence of the primary supply voltage.

With the secondary circuit open, nothing connected, a back EMF along with the primary winding resistance acts to limit the flow of this primary current. Obviously, this no-load primary current ( Io ) must be sufficient to maintain enough magnetic field to produce the required back emf. Consider the circuit below.

The ammeter above will indicate a small current flowing through the primary winding even though the secondary circuit is open circuited. This no-load primary current is made up of the following two components:

·         An in-phase current, IE which supplies the core losses (eddy current and hysteresis). 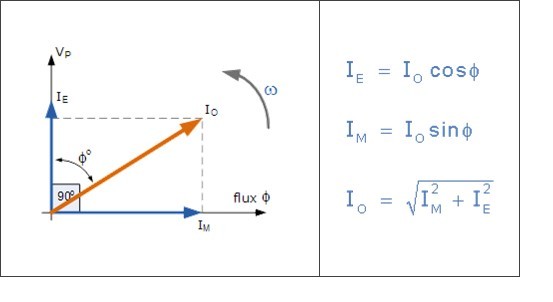 Note that this no-load primary current, Io is very small compared to the transformers normal full-load current. Also due to the iron losses present in the core as well as a small amount of copper losses in the primary winding, Io does not lag behind the supply voltage, Vp by exactly 90o, ( cosφ = 0 ), there will be some small phase angle difference.

A single phase transformer has an energy component, IE of 2 Amps and a magnetizing component, IM of 5 Amps. Calculate the no-load current, Io and resulting power factor. 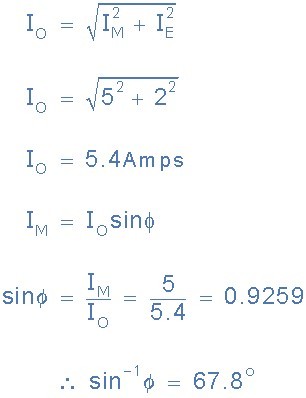 The secondary current, IS which is determined by the characteristics of the load, creates a self-induced secondary magnetic field, ΦS in the transformer core which flows in the exact opposite direction to the main primary field, ΦP. These two magnetic fields oppose each other resulting in a combined magnetic field of less magnetic strength than the single field produced by the primary winding alone when the secondary circuit was open circuited. 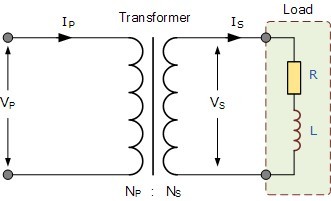 We know that the turns ratio of a transformer states that the total induced voltage in each winding is proportional to the number of turns in that winding and also that the power output and power input of a transformer is equal to the volts times amperes, ( V x I ). Therefore: 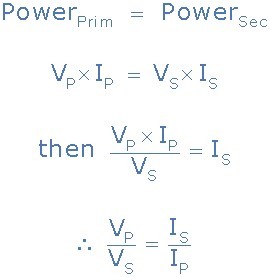 Note that the current is inversely proportional to both the voltage and the number of turns. This means that with a transformer loading on the secondary winding, in order to maintain a balanced power level across the transformers windings, if the voltage is stepped up, the current must be stepped down and vice versa. In other words, “higher voltage — lower current” or “lower voltage — higher current”.

As a transformers ratio is the relationships between the number of turns in the primary and secondary, the voltage across each winding, and the current through the windings, we can rearrange the above transformer ratio equation to find the value of any unknown voltage, ( V ) current, ( I ) or number of turns, ( N ) as shown. 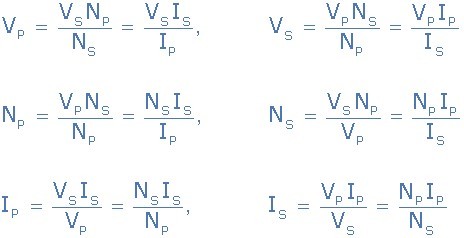 The total current drawn from the supply by the primary winding is the vector sum of the no-load current, Io and the additional supply current, I1 as a result of the secondary transformer loading and which lags behind the supply voltage by an angle of Φ. We can show this relationship as a phasor diagram. 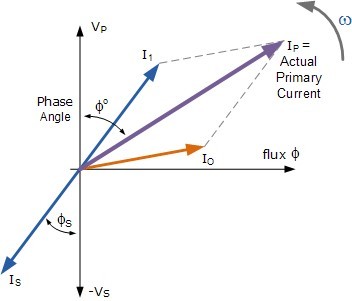 If we are given currents, IS and Io, we can calculate the primary current, IP by the following methods. 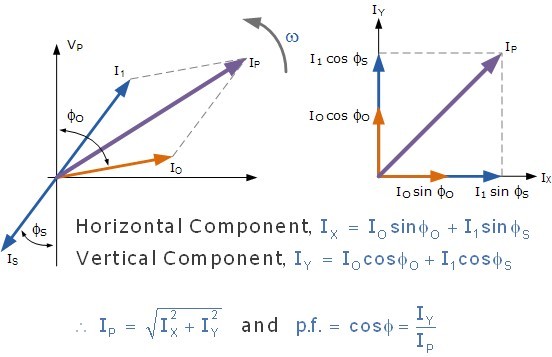 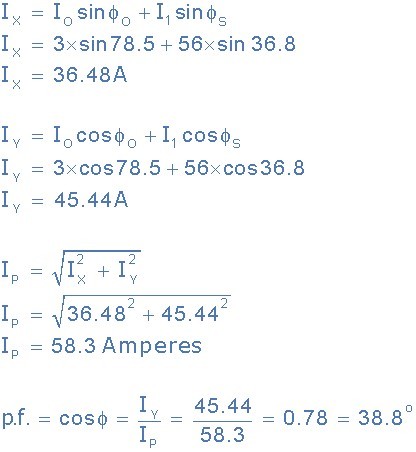 You may have noticed that the phase angle of the primary current, φP is very nearly the same as that of the secondary current phase angle, φS. This is due to the fact that the no-load current of 3 amperes is very small compared to the larger 56 amperes drawn by the primary winding from the supply.

The voltage regulation of a transformer is defined as the change in secondary terminal voltage when the transformer loading is at its maximum, i.e. full-load applied while the primary supply voltage is held constant. Regulation determines the voltage drop (or increase) that occurs inside the transformer as the load voltage becomes too low as a result of the transformers loading being to high which therefore affects its performance and efficiency.

So for example, a transformer delivers 100 volts at no-load and the voltage drops to 95 volts at full load, the regulation would be 5%. The value of E – V will depend upon the internal impedance of the winding which includes its resistance, R and more significantly its AC reactance X, the current and the phase angle.

This article is reprinted from Electronics Tutorials - Transformer Loading.